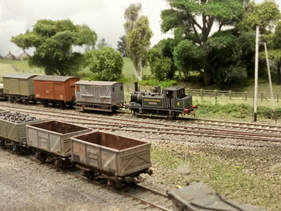 Freshwater was the western terminus of the 12 mile long Freshwater, Yarmouth and Newport Railway on the Isle of Wight. Opened in 1888, the Southern Railway lengthened the platform, removed the loco shed and carriage shed, and modified the track layout slightly in 1927, but the line was never very successful, and closed as early as 1953.
​
The model is built to 1:152 scale, using components and standards of the 2mm Scale Association. Train control uses DCC, and the layout uses servos to operate points, uncouplers and signals, controlled using Merg CBUS components.
The layout plan was based on large scale Ordnance Survey maps, with no compression required. Buildings and scenery are based on all the contemporary photographs so far collected, although some areas are still something of a mystery. Suitable stock will be built, but initially, almost anything may appear on the tracks. Including the fiddle yard, the layout measures 7 feet by 1 foot 6 inches and usually has 2 operators.

This layout was created as part of the 2mm Scale Association's Golden Jubilee Challenge to build a layout with a maximum area of 9.42 square feet.
Proudly powered by Weebly